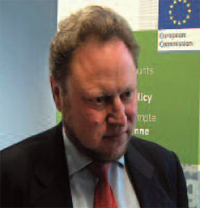 “The European Union attaches great importance to civil society because it allows citizens to express their concerns. It also contributes to the development of strong democratic policies and forces governments to be accountable,” Dr. Michael Köhler, Director for the Neighborhood at EuropeAid said in an interview with the Information Centre for the European neighborhood.

He reiterated the support of the EU for a dialogue with and between key stakeholders in society in the southern Mediterranean, and placed emphasis on the regional structured dialogue currently underway as part of an effort to bring together civil society organizations (CSOs) in a same structure.

Civil society has played an important role in the uprisings that took place in countries of the southern Mediterranean. Did this have an impact on the EU’s relations with CSOs in the region?

I must say that the Arab uprisings have proved to be a turning point in Europe’s relations with countries of the southern Mediterranean, resulting in a major overhaul of policies and partnerships with the various stakeholders in the region. Indeed, actors such as civil society, women, youth and the media have moved towards the heart of the discussions.

The role of civil society in meeting the expectations for a better future is especially important. For our part, as Europe, we must act more than a simple witness of efforts to transform societies of the region.

Although the situation in each country is different, we will make every effort to support what seems to be a key element of a culture of peace: dialogue between key actors in society, including civil society. Overall, the voice of civil society is now listened to by partner governments. In addition, EU relations with Mediterranean civil society have strengthened.

Public consultations are increasing in Tunisia and Lebanon. However, in countries such as Egypt, the expectations have not been met by concrete advancements, as evidenced by the controversial 2013 law on NGOs. Progression to freedom of association and assembly is irregular.

Several countries are experiencing the emergence of new civil society organizations, while in others, the registration of CSOs continue to be discretionary.

Is there a regional dimension to this effort?

Our dialogue with civil society in the South has increased and we are now discussing more permanent and comprehensive regional structures.

To this end, meetings were held in the presence of CSOs, government officials, journalists, EU officials, etc. These exchanges are ongoing and concrete ideas are being suggested on how to network, strengthen dialogue and strengthen civil society. The Commissioner of the ENP Stefan Füle will launch the next phase of reflection on how to implement the best “mechanisms of structured regional dialogue,” based on existing initiatives and platforms.

Is there funding for CSOs, through cooperation programs, for example?

There are basically two different approaches: one is to actually strengthen civil society, making it more viable, making of NGOs partners in the dialogue, thanks to financial support, advice, and putting them in contact with EU organizations.

At the same time, of course, we want to make civil society an element of governance. We want it to scrutinize governments and our cooperation programs. Thus, we also involve it in programming, planning and monitoring of the implementation of operations in countries.

How do you select projects and CSOs?

We must distinguish between the selection of projects and work with the civil society. Our projects are generally determined by demand. So there are tenders, calls for proposals and civil society organizations, both in our partner countries and in EU Member States may submit proposals. At the same time, it is equally important to have a policy dialogue with the civil society, but we do not select organizations. Our delegations in countries are in constant contact with NGOs and civil society organizations wishing that contact and we invite them regularly, for example, to discuss our programs, such as budget support operations. The dialogue is always held at the request of civil society. A final important point is that at the annual assessment of relations with each country, Delegations invite local CSOs to submit their views.