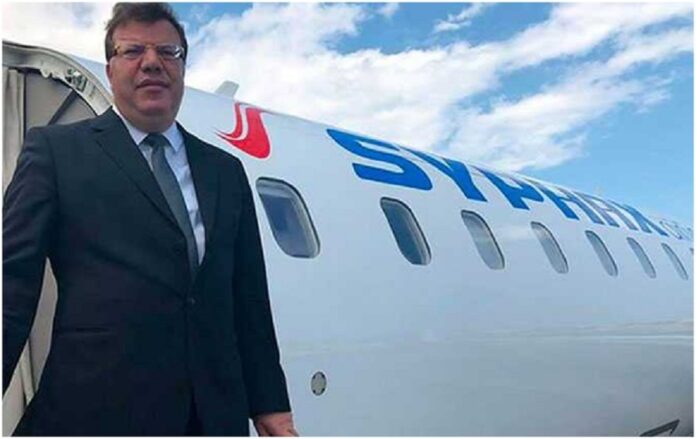 Mohamed Frikha’s Syphax Airlines seems to rise from its ashes. Some will be pleased, others will remember the difficulties of this company and its debts, and also the passage of Frikha in the ranks of an Ennahdha that has the support of only the first-day members. He, in any case, preferred to leave the party of Tunisian Islamists and boasts his independence.

Since its ceased operations on July 29, 2015, Frikha’s company had entered into receivership. In June 2017, it saw the approval of the recovery plan by the court of Sfax. The company had then leased two aircraft, CRJ 900 arrived in 2018. A year later, the company obtained its AOC, and began working in Nigeria, “where it goes very well,” comments for Africanmanager the head of a Syphax that already works with 3 aircraft in Lagos in ACMI mode (Aircraft Crew Maintenance Insurance). This is a kind of leasing of aircraft, which remain under Tunisian flag, with their crews.

Frikha is even positive in estimating that “currently, we export our aviation services to Nigeria. What is certain is that he earns money. In 2019, his company realized the equivalent of 40 MD. Because of COVID-19, which had caused a shutdown of almost 6 months, he made only half of that in 2020. “The activity is therefore profitable, and we already record similar requests from countries such as Ghana or Cape Verde, and even in Nigeria on behalf of other companies.

This beautiful picture of a painful (especially for his company’s passengers) rescue of a company does not hide, however, its setbacks, and especially the slate it has left. He estimated the debt it “owes” to some 75 MD. The remainder, it is the associated current account of 40 MD “that I do not consider as priority, in addition to a debt towards Airbus about the A330, which is still the subject of a litigation. We believe that this debt is inflated, and we are still negotiating.

That debt would include, according to him, 20 MD for the SNDP, 10 MD for the OACA, 5 MD for the Amen Bank, 8 MD for the BNA, “a small debt for Tunisair Technics, but not for Tunisair, which is rather owed 0.5 MD via its subsidiary Express which had at a time rented our aircraft during the months of May to July 2019.

– A debt adjustable over 15 years, and it has not yet started to be settled

According to the recovery plan that Mohamed Frikha was able to have in Sfax, “the plan to settle this debt is spread over 15 years. That makes for us some 5 MD per year, which remains feasible. We had to start paying, since July 2020. With COVID, we had asked for a postponement of one or two years until the restoration of aviation activity. Our request is under consideration.

For passengers’ debts, he says that everything or almost everything has been paid. “For those who had purchased tickets from travel agencies, IATA had blocked our payment, returned it to the agencies that had to reimburse the passengers, for the sum of almost €1.5 million. For passengers who had purchased their tickets via websites in France by Carte Bleu, those were reimbursed by the organization “Ogone”, for an amount of some €700,000. There remain the tickets taken directly from Syphax, in Tunisia and France. For these cases, we have made a website for requests for recovery of ticket prices, and have so far reimbursed between 700 and 800 thousand TD, to all those who have requested via this site, and we remain willing to pay all those who will request on this site. We were unable to access this site.

“For the staff, they had been paid for June and July 2015, before the shutdown of the activity as well as the salaries of all our staff. We have also reimbursed the €700 thousand of Euro-Control. We continue to clean up the financial situation of the company and we are on the right track there, “Frikha further says.

And when we ask him why he would want to return to work in Tunisia when his business is doing well elsewhere, Frikha said that “we did not ask that, but to remain in the service of the national flag. We are currently thinking of setting up a hub between Africa and Europe. This is in our development plan, developed through a US consulting firm. But it has been delayed because of COVID-19. For the rest, we remain active abroad, but in reserve of the national flag, so to speak.

For the former Sakher El Materi’s plane that he had acquired on credit from the BNA, Mohamed Frikha said that the Falcon 900B is no longer in operation, and “we are in partnership with a French company to ensure the maintenance before joint operation. He will not deny that he used to rent it to a political party whose name he will not say, but also to various other parties including two former presidents of the Republic, and a former prime minister at the conventional price of 3 to 4000 USD per hour, not to mention the flights on demand for individuals whose names he will not say. “This plane was to be sold to an American personality. It was then proposed that I take it over, with foreign financing, which I had agreed to in principle. Disappointed, the American then blocked me from the foreign financing. I then turned to the BNA to pay the 8 MD needed for the purchase of the Falcon for 11 MDT ” [Editor’s note: Which were still not refunded, as confirmed by Frikha].

And to answer those who still accuse him of having made his plane available to the organizers of trips to Jihad via Turkey, Mohamed Frikha said “the Falcon had gone only once to Turkey, on behalf of a political figure,” he would not name afterwards. He added that “for private flights, the names of all passengers must be communicated to the civil aviation. Otherwise, the issue of terrorists is just a rant. For Syphax, it has made trips to Turkey and I had provided statistics showing that all travelers registered at departure always returned with our aircraft”.

And when we ask him how a businessman, indebted as he claims, could launch a satellite, the businessman who claims to be only DG, not a majority holder, of the company that made the launch. “Telnet is not my property, as few people know. It is 55% of its capital on the stock market, and the rest shared between several major shareholders [Editor’s note: At Hikma shareholding, a company located in La Marsa, employing 15 people, generating 1.1 MD and whose main manager is Med Frikha, according to D&B Business Directory]. It is therefore a separate company, independent of Syphax and does not have the same shareholders, “highlighting the fact that he had been the main loser, by the 40 MD invested in Syphax and never repaid. “The challenge, for me, remains to relaunch Syphax by a strategic plan, and will become listed on the stock exchange and the savers in the stock market will find their savings.