HomeFeatured NewsHe knows all the prices by heart, but always looks for the...
Featured NewsInterview

He knows all the prices by heart, but always looks for the trick to lower them 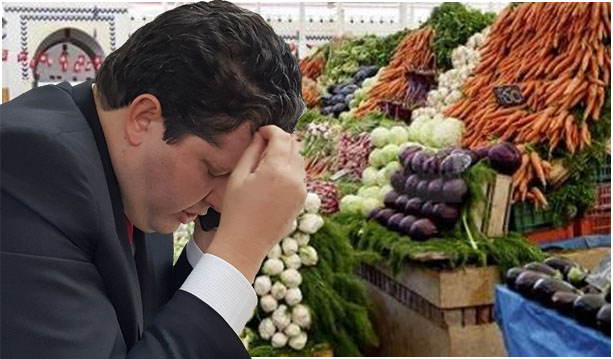 Omar El Behi is Minister of Trade. But he is also a farmer in field crops, especially wheat, where he sells all his production to the state. He denies to be close to the Prime Minister. “We never worked together, but I knew him in the agriculture sector,” he said in this interview with AfricanManager.

And when asked how he was able to save his head during the last cabinet reshuffle, he is proud to say that “I stayed because I worked”. And he jabbed those who expected him to leave in the eye, saying “trade ministers do not stay long, because there is a lot of greed, temptations and there are too many people who like to work in the commerce department”.

Later, he added that “if I stayed, it’s because I work calmly and with all my energy”. Will understand who will want!

In any case, Omar El Behi (translated Omar the Good) has a fairly easy answer and responds with a quote he loves, certainly because it is his. “Every man who manages, who does something, has against him those who would like to do the same thing, those who do the opposite and especially the great army of people, all the more severe that they do nothing at all.”

What are you doing to improve purchasing power?

Since the 1990s, we have entered the system of free competition. It is a choice that has not been made not only by Tunisia, but also by several other countries, because this type of system allows a prices to reflect costs, affordable prices and where supply and demand make this truth prices.

Soviet or communist models have shown their failure. We can no longer make a regulated economy, with the importing State, which exports and fixes the margins.

This type of economy is now outdated and we will not put this economic choice into question.

Now, there are supply issues that have created price pressures. Our main objective is to ensure the good supply of the market. We have had problems over the last two years in poultry, vegetable, meat and fruit prices because there has not been a good market supply.

However, we have launched a program to control the selling prices of these products. For example, currently the price of poultry meat has decreased by 1% compared to last year.

For the other products, they are impacted by the floods of 2016, 2017 and 2018, years that were extremely dry, with a lack of water in dams and therefore a fall of production, which automatically created a shortage. At present, we only import potatoes.

For other vegetables, we have self-sufficiency. In 2018, there is a good level of stocks at the level of potatoes, which has led to a fall in the price of this product by -30%, 50% for tomatoes, but the price of pepper has increased a little. We will, therefore, try to control the price at the point of sale. The prices of Clementines, seasonal fruit par excellence, are affordable with an average price of 1600 millimes.

We have a program and we are going to control the prices of consumer staples.

Do you control the circuits of cold stores?

Yes, but I think there are speculation problems. There are about 800 cold stores, distributed throughout the Republic. Fortunately there are stores that preserve products like dates and we control these stores.

I also want to point out that we have 12 thousand vegetable merchants, 8 thousand butchers, 6 thousand poultry sellers, 3 thousand fishmongers.

Given the large number of these different players in distribution channels, it is difficult to control them. All we can do if there is a lack is to import. For example, we imported 5 thousand tons of potatoes to regulate the market.

In January and February 2018, there was a drop in poultry production and one million hatching eggs were imported to increase production and control prices.

However, we must continue the control and for those who do not respect, we close the premises.

In fact, approximately 280 premises have been closed in two months, and several more will be closed by the end of this year.

The Prime Minister and the Interior Minister are concerned about this case and will do everything to enforce the law. I also call on the media to report cases of abuses by merchants.

Despite this, inflation is still rising!

We must understand why inflation has increased. First of all, we have inflation that has two origins: inflation by cost and imported inflation. We have inflation caused by the budget law and we are suffering a rise in the price of a barrel of oil, not to mention the fact that energy prices have not yet fallen.

Inflation has stabilized. In 2019, there will be a decline. We preferred to reduce budget deficits. This is the choice of the government, we have planned a decrease in the deficit, in 2018, at least 4.9% and we have succeeded.

To achieve this, we had to improve the revenues, through the consumption tax, the customs duties and the increase by one point of the VAT.

To stabilize inflation, productivity needs to be improved. Our GDP is not increasing significantly.

We have great program to control prices on all levels. Moreover, we managed to control inflation which is at 7.4% and we should end 2018 at the same level. In Egypt, just for example, the inflation rate is about 14% against 33% in July 2017.

You were part of UTAP. Do you defend farmers or consumers?

Tunisia has recently bought wheat massively. Will not there be fears for lower prices?

Tunisia buys quantities of wheat in order to guarantee a strategic stock of two months of consumption. We must first make a distinction with regard to common wheat. We import 95% of our wheat requirements and between 30% and 70%, depending on the season, in durum wheat.

The government has chosen to rely on soft wheat because it is a small production. That’s why we buy a lot of durum wheat.

And what about the milk sector, which is in danger?

The sector is in trouble because of drought and soaring prices. But the difficulties are exaggerated. Milk manufacturers want to liberalize prices and we cannot do it.

Manufacturers need to be more involved in the milk sector, especially in terms of production.

Industrialists will have to encourage farmers and help them buy livestock. Now we have 12.5 million liters of milk.

Did you propose this approach to the largest group in Tunisia?

Yes, we have proposed this approach and they are interested. I spoke about it personally with Mr. Hamdi Meddeb who reiterated his agreement.

Meddeb has accepted while his union representative still refuses!

That’s normal, it’s unionism. I think that the manufacturers must help us to upgrade the production to make investments. Prices can be revised, but there is also a need for upgrading and better supervision for farmers.

If we really want to save the industry, we need work, sanitation of the livestock by the State and an updating of slaughterhouses. All this requires a lot of money and years of work. Vast endeavor!

Yes, we have agreements with supermarkets to ask them to apply the margins. For the other parties, they have been called upon to make an extra effort on price display and transparency. They are not engaged on a specific rate but on a decline and we will still talk with them.

Have you reviewed their participation in the consumption of Tunisian made products?

According to the figures I have, foreign products represent less than 20% of the turnover of supermarkets.

Did they commit to lowering the import?

Yes, we talked with them to further streamline the import.

Recently, the Ministry of Trade has established a list of products that will be subject to technical control, to better control the import. Is it regular?

Yes, it is regular. We now have a set of specifications to rationalize imports, check products and meet standards. We want a better import.

It is the Ministry of Trade that gives authorizations and you have left people who brought in non-compliant products?

We give permissions for hyper markets, Malls, food. For example, for clothing franchises, it’s without authorization. Overall, the textile sector is even a surplus sector and there are investments in Tunisia.

What is the usefulness of Malls? They proliferate and are supposed to sell imported products?

We are encouraging them to market Tunisian products. There is not an agreement, but talks.

We noticed that the fight against the parallel trade has almost stopped with Omar Mansour?

No, it’s a continuous job. The fight against street vending is the responsibility of the Ministry of Local Affairs, in collaboration with the Department of the Interior. I would like to point out that we are going to create the Ben Guerdane Free Trade Area at the end of March 2019.

What is the free trade zone in that specific region?

It is offshore and the entire informal sector will become formal. We are working on this project. We work in the long term to reduce taxes.

What have you done to reduce the big deficit with Turkey?

Article 17 of the Free Trade Agreement with Turkey has already been applied and a 40% reduction in imports has been achieved across the entire list of 400 products.

What is the ambition that is very important to you, but still unachievable?

Important reforms, such as the bill on the exchange that has been for a year at the parliament and which was supposed to bring in foreign currency, through a levy in full discharge. This reform is still blocked at the Parliament.

What are your ambitions?

Otherwise are you happy with your balance sheet?

No, I’m not happy. I can do better, but the conditions in which we work are difficult.

Is your boss happy with you?

Ask him the question. I cannot answer for other people