HomeInterviewMoez Labidi to Africanmanager: Tunisia may not repay its Qatari, Japanese and...
Interview

Moez Labidi to Africanmanager: Tunisia may not repay its Qatari, Japanese and American loans  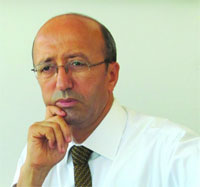 On the sidelines of the Business Days held from December 6 to 7 in Sousse, Moez Labidi, economic and financial expert gave an exclusive interview to Africanmanager in which he noted that the economic recovery is slow to come as long as the political crisis is not resolved. He also spoke of Tunisia’s difficulty to access the external market, and meet its obligations to repay its debts.

How do you assess the current economic and financial situation of the country?

The situation today is very delicate. There were a lot of constraints weighing on the national economy leading up to the political deadlock that is behind the blocking of reforms and a financial impasse experienced by Tunisia since the Revolution.

The financial impasse is reflected in the downgrading of Tunisia’s rating, the reluctance of the IMF to release the second tranche of credit, or the reluctance of the World Bank and the African Development Bank (AfDB) to extend us loans. If we will miss the year 2014, there is a good chance that the way out of the political crisis will be further delayed, since the year 2014 will be an election year. The problem is that if we cannot swiftly put the country on the path of recovery, we may not be ready for the repayment of 2016 and 2017. It should be recalled that Tunisia must pay in 2016 and 2017, the Qatari, Japanese and American loans.

What does the fall of the dinar against the euro and the dollar means?

The fall of the dinar is understood from the pressure on the balance of payments where the current account deficit continues to widen. As long as imports grow at a higher pace than exports, the country will need more currency. In other words, there is an effect of depletion of foreign exchange reserves. It is true that in recent times, these reserves were boosted by the Central Bank of Tunisia (BCT) through the Qatari deposit, but this may last if things do not improve.

What effect on the national economy?

According to you, can Tunisia break with the successive downgrades of its rating by international agencies?

Unfortunately, Tunisia is sinking deeper into junk status, and as long as things do not improve, especially on the political front, I think the damage is irreversible for the moment. A political response is needed to stop the degradation, break with the pace of deterioration and give an economic response to reverse the fall.

Due to this degradation, not only we will not be able to borrow from the international market but also our bargaining power with foreign and bilateral donors will be weakened. Alternatively, the guarantees will become rarer with this downgrading. At the balance of payments, the lowering of rating will much weigh since we pay our foreign reserves.

I think things will become very difficult, and as long as things do not improve at the political level, Tunisia will build on bilateral relationships i.e. neighboring countries and Gulf partners to balance the budget. Despite all this, this approach is insufficient considering the amount that Tunisia wants to take in the next two years, including 5.5 billion dinars from the external market and 2.5 billion dinars from the local market.

For the internal borrowing, it is not sure it will be successful because of because of the lack of liquidity in the market.

Can we talk of an economic recovery for the next two years?

Will the draft Finance Act 2014 really meet the needs of the country?

The problem still lies in the assumptions set up in terms of financing. We always have a financial equation that must be brought to a successful end to mobilize the necessary capital. Citizens accept a dose of austerity when they see that the austerity bill passes, first, by the political class which must set the example.

Do you approve the new taxes on passenger cars?

I see cars should be taxed beyond 5 horsepower. Those having 4 to 5 horsepower still remain in the middle class. If rationing expenditure is shared by everyone, there will be no problems. However, in the draft Finance Law for 2014, we see more sacrifices from the middle class.