HomeInterviewNeji Djelloul to Africanmanager Ennahdha has made courageous ideological revisions by abandoning...
Interview 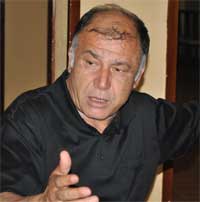 In an interview with Africanmanager, political scientist and academic expert in contemporary Islamist movements, Neji Djelloul said the Ennahdha movement is part of the Muslim Brotherhood and its President Rached Ghannouchi had broken with the jihadists after the attack on the U.S. embassy Tunisia. He, however, called on him to get rid of the Salafis altogether.

He acknowledged that Ennahdha has conducted a painful but courageous ideological revision, by abandoning the chimeras of the Caliphate and Sharia.

Referring to terrorism, the political scientist noted that poverty and exclusion, combined with the weakness of state institutions are factors aggravating the installation of terrorism in Tunisia.

What is the relationship between Ennahda and the Muslim Brotherhood?

Since its founding in 1973, the Tunisian Islamist group was part of the nebula of the Muslim Brotherhood. In the same year, its Deputy Emir took the oath of allegiance to the Egyptian Murshid Hasan al-Fudhayli renewed again in 1981 at the time of Murshid Omar Tlemçani, after the establishment of the Islamic Tendency Movement (MTI).

This membership in the Muslim Brotherhood International Organization is confirmed by Hamadi Jebali, who in an interview with “Realités” dated February 17, 2011, said: “We are part of the Muslim Brotherhood and we are still there in some way. We participated with others to substantially change the movement. ”

How much can we believe that Ennahdha is putting in place a moderate and non- extremist Islam in Tunisia…?

Ennahdha is basically a conservative Islamist party with a moderate orientation, hence the dual speech that is balancing in TVs and the incendiary sermons for the base in mosques.

After the attack on the U.S. embassy, Ghannouchi seems to have broken with the jihadists and got closer to the Turkish model. But to become a sustainable player in the Tunisian political scene, Ennahdha must sooner or later get rid of the Salafist wing.

Is it possible to speak today of a republican and democratic state, with Ennahdha in power?

Ennahdha has made painful but courageous ideological revisions, abandoning the chimeras of the Caliphate and Sharia. But to establish a true democratic republic, the party must cease to undermine the foundations of the Jacobin state by creating through the Waqf (s) and religious and charitable organizations, a parallel civil society similar to the Egyptian Mamluk model especially since a large number of associations is more or less linked to the Muslim Brotherhood nebula.

Can Ennahda easily impose its laws in Tunisia?

Ennahdha is sociologically a minority in Tunisia. Its ideology is rejected by a majority of Tunisians. It largely draws, however, on the erosion and breakdown of the Democratic and Modernist camp. Without the sacred union of democrats, the party of Ghannouchi can win the next election and build on this success to sustainably change the foundations of our society.

As terrorism continues to find a place in Tunisia, what are the factors that fuel this scourge, according to you? Is it poverty as some believe?

Poverty does not automatically lead to terrorism; otherwise countries like Brazil and India would be the largest exporters of terrorists. Instead, the Gulf monarchies are a chosen land of Jihadism which is primarily an ideology. Poverty and exclusion, combined with the weakness of state institutions are, however, aggravating factors.

To what extent can Ennahdha be accused of being behind the rise of terrorism in Tunisia?

Jihadism is marked by the thought of Sayid QOTB, the ideologue of the Muslim Brotherhood. The founders of Al- Qaeda are also former Muslim Brotherhood. There is therefore an obvious ideological kinship between the movements of Islamism. In Tunisia, Ennahdha has certainly broken with its violent past, but a large share of responsibility in the development of this scourge falls on that party which during its two-year rule has simply stood by and done nothing in the name of the “solidarity” dear to Rached Ghannouchi.

Similarly, a significant segment of the base of Ennahdha, which has its spokesman in the governing body of the party, endorses the Salafist speech and violence.