HomeFeatured NewsTunis: TD 2.33 billion worth of import taxes evaded and it's getting...
Featured News

Tunis: TD 2.33 billion worth of import taxes evaded and it’s getting worse since the revolution 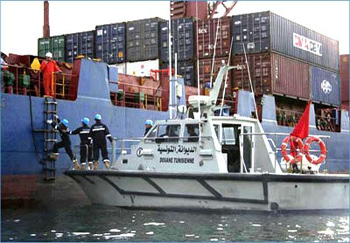 The World Bank (WB) released at a press conference in Tunis its report entitled “Political Connections and Tariff Evasion: evidence from Tunisia.” It shows that tariff evasion has increased after the Revolution for all companies as a whole. This increase is estimated, according to the Bank, at 5%. Moreover, companies belonging to President Ben Ali and his family were more likely to evade import duties.

According to the report, tariffs linked to Ben Ali’s family and his allies are about 1.2 billion in taxes more than other private companies at least for the period 2000-2009.

It emerges from the findings of the World Bank that politically connected firms are more likely to cheat in particular in the case of products with high tariff rates and taxes. Deviations due to under-reporting of prices of imported goods and undervaluation of imported goods’ prices were also recorded in this report.

The report also revealed an underestimation of prices of goods imported for firms privatized to Ben Ali’s clan.

The fact that differences due to fraud are higher in product lines mainly imported by companies linked to the Ben Ali regime seems to be explained by their higher propensity to underreport prices, said the report by the WB, adding that unit prices reported by firms linked to the Ben Ali regime were lower than those reported by other companies importing the same product, and furthermore decreased considerably more rapidly with increasing tariffs than those reported by companies having no links with the regime.

The report further notes that the privatizations carried out in favor of Ben Ali are associated with reductions in reported unit price, which is not the case for privatization as such.

According to the report of the World Bank, tariff fraud in Tunisia resulted in considerable tax losses, but also brought great inequality insofar as entrepreneurs linked to political power, who were wealthy, seem to have been particularly prone to benefit of customs fraud.

“Just underreporting unit prices enabled companies linked to political power to avoid paying at least $ 1.2 billion in import duties between 2002 and 2009,” notes the bank’s report, before adding that while the revolution has dramatically reduced regulatory privileges contrary to the principle of competition that benefitted the Ben Ali’s family, it did not put an end to customs fraud. Instead, tariff fraud in Tunisia has risen steadily since the Revolution.

Asked about the usefulness of this particular report 4 years after the Revolution, Bob Rijikers, an economist at the World Bank and among economists who have produced this report, referred to the difficulty of access to information and data in particular those related to businesses.

He, however, expressed the bank’s commitment to work more to improve the situation and address serious problems in terms of access to information.

Saudi wheat importer in no rush to buy