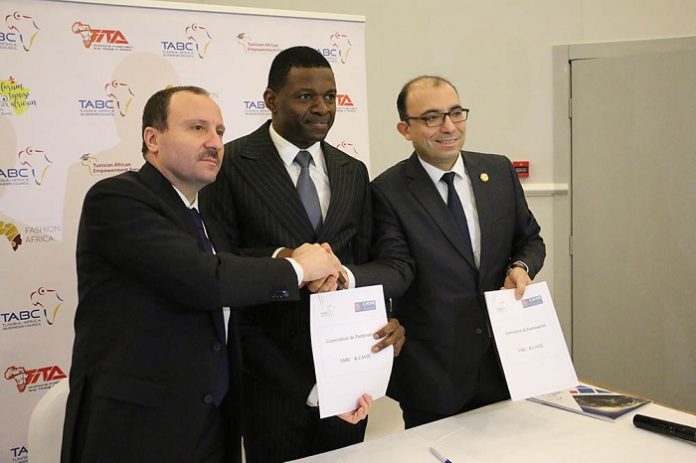 In the framework of the launch of the African Center for Competitive Intelligence “ACCI Tunisia”, the Tunisia Africa Business Council invited Mr. GUY GWETH, President of ACCI, a leader in the field of economic Intelligence in Africa, to moderate a conference entitled “Economic Intelligence and Strategies for Capturing African Markets” held on Thursday, March 22, 2018 at the Sheraton Hotel, Tunis.

GWETH first presented the issues, methods and tools of business intelligence in the African context.

Then, he outlined the strategy of the big powers and the emerging countries, and the place of the Tunisian interests in Africa.

TABC President Bassem Loukil said his organization is constantly launching initiatives to ensure the best support for its members.

Through the launch of ACCI Tunisia, Tunisia, TABC aims to provide economic diplomacy with a striking force in terms of reliable information on the political, social, security and economic environment of all African countries.

The purpose of the ACCI Tunisia is, on the one hand, to promote business watch and intelligence practices in Tunisia, as well as their involvement in the competitiveness of Tunisia and on the other hand, to help companies better understand the African market with a view to developing trade relations.

– Raise awareness among governments, diplomatic representations, development partners, companies and the educational world about the challenges of competitive intelligence in Africa;

– Set up awareness-raising and training programs on the specificities of business watch and intelligence in Africa;

– Contribute to the creation and development of sectoral watch and business and strategic intelligence systems within public and private institutions in Tunisia as well as in the rest of the continent;

– Strengthen the capacity of African markets to understand public and private institutions as well as the holders of individual projects;

Mondher Khanfir, TABC Vice President in charge of the Think Tank, will serve as Honorary President of ACCI Tunisia, surrounded by several senior executives of the Tunisian administration and diplomats, to ensure the framing and bring a strategic vision to the center.