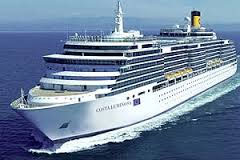 Costa Cruise, one of the largest cruise operators in the world, has resumed its activities in Tunisia, after a two-year interruption because of instability caused by the January 2011 Revolution.

Costa Voyager ship docked Thursday at the Port of La Goulette with, on board, 700 passengers, marking the resumption of its calls in the Tunisian port.

A second call to the Port of La Goulette will be operated on September 18 by the ship Costa travel chartered by the French tour operator cruise Taaj, Ali Ben Ahmed, the official agent of Costa and CEO of the travel agency Orange Cruises in Tunisia, told Tap.

The captain of the ship Costa Voyager, Philippe Fichet-Delavault welcomed this recovery after two years off. “We want Tunisia to be one of referential stops of Costa,” he has said, adding that the majority of travelers aboard his small boat (capacity of 900 passengers) are French.

Until the end of August 2013, 125 cruise ships docked at the marina of La Goulette said Sahbi Azouz, director of the press office at the Office of Merchant Navy and Ports (OMMP).

Tunisia: 34 groups of Russians tourists expected in Djerba this week...

Tunisia: DG of Archives gets everything off his chest, Ben Sedrine...