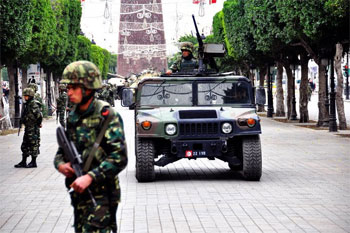 With the approach of parliamentary elections in Tunisia scheduled for this Sunday, October 26, 2014, security and military institutions are engaged in close coordination to place the ballot under surveillance.

Tens of thousands of soldiers and police are on a war footing to ensure the success of the elections, and the threat of terrorists will in no way prevent the protection of citizens and the good conduct of the forthcoming elections. It is therefore a more complete and accurate collaboration.

Lieutenant Colonel, Belhassan Oueslati, spokesman for the Ministry of Defence said in a recent statement to Africanmanager that preparations undertaken by the Defense and Interior departments to ensure the smooth conduct of the forthcoming elections continue at an accelerated and sustained pace.

“We have developed a comprehensive and very solid strategy in order to protect our country. Our mission is to immunize Tunisia against any terrorist threat, “he said.

For his part, Mokhtar Ben Nasr, President of the Tunisian Centre for Security Studies told us that “The Departments of Defense and the Interior have prepared a strategic roadmap to address all forms of threats, preparations have well advanced and the elections will be a success.”

Nearly 46,000 security personnel will be deployed alongside a large number of soldiers to ensure the serenity of the vote across the territory of the Republic. The vigilance is required and the two institutions are ready to perform their duties and tasks not only during this period, but also beyond, “he has said.

The President of the Tunisian Centre of Security Studies, on another hand, called on citizens to fulfill their electoral duty and lend a hand to the security apparatus and the army to protect the country.

Actually, since septembre2014 the Higher Security Council under the Presidency of the Republic and the Crisis Response Unit created by the Prime Ministry have adopted provisions to deal with terrorist risks to the electoral process. Reliable data were collected indicating that terrorist threats that target the electoral process are real.

The UK has recently donated equipment to detect traces of explosives in Tunisia to increase its security capabilities and support its efforts in the fight against terrorism. The equipment will be used for the protection of tourist facilities in Sousse and Hammamet, before generalizing them in all facilities in the country.

For its part, the Turkish government announced its willingness to continue providing logistical support to the army and security forces in Tunisia, to help them build their capacity to fight against terrorism.