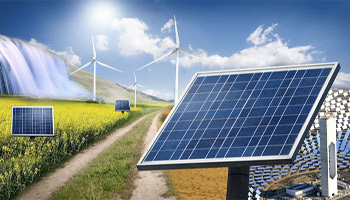 Tunisia has put in place a global strategy for the development of wind energy projects, the objective of which is to cover 30% of its energy production with renewable energies by 2030.

Recent data published by the Tunisian Ministry of Energy, Mines and Renewable Energies, note that Tunisia is listed among several countries in the Middle East and North Africa (MENA) region with enormous capacity to exploit renewable energy.

According to the same source, Tunisia is still seeking to generate 140 MW of wind energy and 70 MW of solar energy.

For solar energy, 10 MW will be dedicated to small projects up to 1 MW while the remaining 60 MW will be given to larger projects of up to 10 MW the project.

A program for the promotion of renewable energies has been established between Germany and Tunisia. Through this cooperation, the two countries work more to promote exchange and experience in this promising field.

It is in this context that at a conference organized by the German Tunisian Chamber of Industry and Commerce (AHK) on September, 2017, on the theme “Wind energy in Tunisia”, Andreas Reinicke, Ambassador of Germany to Tunisia said that Germany still supports Tunisia in its transitional process and is working more to strengthen the areas of cooperation between the two countries.

For his part, AHK Tunisia’s Director General, Martin Henkelmann, said it is important to exploit the potential of renewable energy in Tunisia, specifying that each actor in the private sector is called upon to make laudable efforts to develop the sector and to assume its responsibilities.

As for Khaled Kaddour, Minister of Energy, Mines and Renewable Energies, he said that for years Germany has been a privileged partner for Tunisia and the areas of cooperation between the two countries are diverse and varied.

He added that the participation of German companies and their involvement in the energy sector remains necessary and this, through new experiences, which will allow developing structuring projects whose fundamental objective is to create wealth, employment….

He also said that Tunisian professionals in the sector are always ready to cooperate more with their German counterparts (B to B meetings, exchange of experiences, research …).

AHK has announced a visit of a delegation of German businessmen operating in the wind energy sector from September 18 to 22, 2017.

A series of B2B meetings with Tunisian companies have been scheduled on the occasion.

These meetings will allow participating companies to explore new opportunities for cooperation, transfer their know-how and increase contacts.

Tobacco ban would have ‘serious effect’ on Duty Free trade