HomeInterviewTunisia has an asset on which it can rely to move forward...
Interview

Tunisia has an asset on which it can rely to move forward in terms of energy, according to ADEME Executive Director 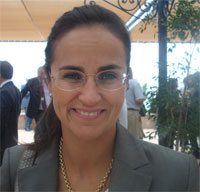 For Virginia Schwarz, Executive Director of the Mediterranean Association of National Agencies of Energy Conservation (MEDENER), Tunisia is a forerunner in energy management in the Mediterranean region. Important policies have been in place for years and there are also concrete achievements.

Virginia Schwarz says that Tunisia has an asset on which it can rely to move forward in achieving energy transition.

Special interest is being taken in energy transition in many parts of the Mediterranean. What is the vision of MEDENER in this process?

MEDENER has always emphasized the importance of energy efficiency. This is really the first thing that needs to be done. In the case of energy transition, it is a message that MEDENER continues to bring even before looking at the supply of energy. We must consider the demand and energy savings.

With regard to the energy transition, MEDENER also conveys the idea that national agencies in each country can provide concrete answers because they are striving to ensure that energy transition be a reality, particularly as part of the Mediterranean Solar Plan. MEDENER could provide operational support for the implementation of the plan once the master plan will be approved at the end of the year.

Today everyone agrees on the need for the establishment of a common vision among the various Mediterranean countries to better meet their energy demand. What do you think?

This is something that must be appropriated locally. With regard to precise policies to be implemented, each country must define its own policy based on its particular characteristics, particularly since they do not have the same resources in terms of fossil or renewable energy. Similarly, countries have different industrial structures and they do not have the same type of consumption or the same types of building. There is therefore a common framework and shared principles that can be put in place, but they must be defined for each policy based on the specific territory.

In the case of Tunisia, is it capable of ensuring energy transition, especially since it is currently experiencing an energy deficit?

The only thing I can say is that Tunisia is a leading country in the Mediterranean, in terms of energy efficiency. There are important policies that have been implemented over the years. There are also concrete achievements.

Let’s talk about funding, what are the means mobilized for the transition?

There are European and other multilateral funding. We may cite as an example the UNDP as a stakeholder and the Global Environment Fund which contributes effectively. We know that there are financing arrangements that exist. We must not only have money, but also make plans to have a strategy.

What are the constraints faced?

There are many constraints noted. However, these problems differ from one country to another with a great diversity between the acceptability of the population. In some countries, renewable energy can be seen as a positive thing. The debate, for example, on wind energy is often a hindrance to the development of facilities.

We may also have regulatory hurdles because the whole energy system regardless of the country could be highly centralized with centralized modes of production, but which are not necessarily very suitable for the decentralization of an energy policy.

There are also problems of knowledge and lack of public information. It is not just the government, but a change in the lives of all citizens. To negotiate this change we need to have people communicate in a very massive way.