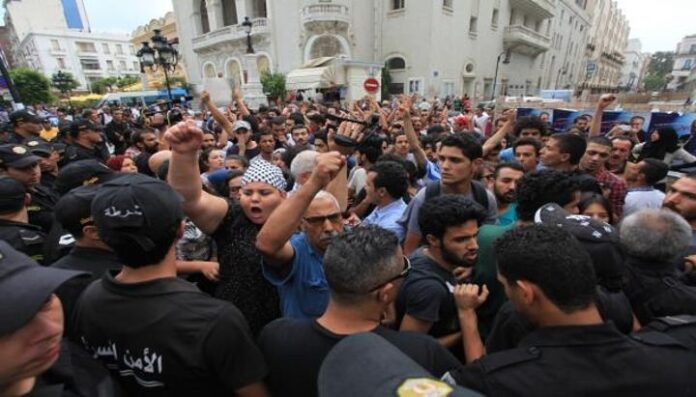 975 social justice protests were staged in July, most of them in the south-west and particularly Gafsa, coordinator of the Social Observatory of the Tunisian Forum for Economic and Social Rights (FTDES), Najla Arfa said at a virtual press conference held Thursday.

The number of protests in the last seven months (January to July 2021) has reached 7773 against 4566 during the same period last year, according to the same source.

The south-west leads the protests staged in July 2021 with 325 protests, followed by the north-west region (194 protests), the south-east (166 protests) and the center-west (125 protests).

The governorate of Gafsa saw the largest number of social protests in July 2021 with 277 protests over lack of development and jobs, followed by Tunis with 98 protests and Tataouine with 70 protests. No protests were observed in the governorate of Kef, according to the same source.

According to Arfa, 79% of all protests organized in July 2021 were random, adding that the sit-in is the predominant form of protest (50% of protests held in July, or 488 days of sit-in).

45% of the protests organized in July were socially-oriented, compared to 22% economic.

Demands were made to improve infrastructure (12%), as well as administrative mismanagement (11%) and against the political class (10%).

The increase in the number of protests in July 2021 is attributed to the climate of social tension and resentment against the political class due to deteriorating economic and social conditions.

Electricity and drinking water cuts in July, as well as rising inflation, price hikes, deteriorating performance of the government and political class, and declining health care services due to the spread of the coronavirus are all factors that triggered protests in July.

On the other hand, workplaces, governorate headquarters, roads and ministry headquarters are the main places of protest with 26%, 13%, 13% and 7% respectively.

1 in 7 cases of violence are criminal

Criminal violence accounts for 71% of violence cases in Tunisia, followed by political violence (13%), violence in the public space (9.7%) and economic violence (3.2%), also announced the coordinator of the Social Observatory of the FTDS.

She attributing the spike in criminal violence to the growing post-Revolution psychological pressure experienced by Tunisians considering the deterioration of socioeconomic conditions as well as lack of respect for State institutions which, she said, contributed to the development of aggressive behavior.

Individual violence represents for 58.1% of all violence recorded in Tunisia during the first seven months of the year 2021 against 41.9% for collective violence.

The number of suicides and attempted suicides edged down in the past 7 months to 89 against 159 reported during the same period last year, according to the FTDES report.

Eleven suicide and suicide attempts (6 men and 5 women) were reported in July 2021. Three cases were logged in Tunis, 2 in Kasserine, 1 in Sousse, 1 in Ariana, 1 in Bizerte, 1 in Nabeul, 1 in Jendouba and 1 in Medenine.

Tunisia: Do not strain at the banker!