Tunisia: strikes down by 22% 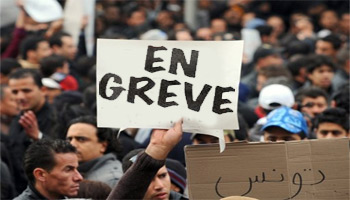 After a period of inactivity, the Tunisian economy is recovering, boosted by several factors, including the good performance of the agricultural season and the consolidation of the pace of business in tourism and transportation as well as the growth in foreign direct investment.

That being said, the last period was marked by an improved social climate. According to figures provided by the Ministry of Social Affairs, the number of strikes during the first half of 2012 fell 22% compared to the same period of the previous year. A decline was also posted in the number of firms affected by strikes from 239 to 190 companies until late June 2012, down 19%. According to the same source, the number of employees who participated in strikes fell by 48%. Regarding participation in strikes, the number of employees involved was down -41% from what it was in 2011.

With regard to the working days lost because of sit-ins, a remarkable decrease of about 28% was recorded compared with the first half of 2011. These strikes have affected 190 companies including 159 private and 22 public.

Regarding the distribution of strikes by regions, the governorate of Sfax is among the regions most hit by strikes with 26%, followed by Ben Arous (15%) and Tunis 2 with only 7%.

According to structures attached to the labor and reconciliation inspectorate, 526 strike notices were recorded in 2012 against 387 notices, until June 2011, which corresponds to an increase of 36%. Note that 315 notices were canceled, 151 strikes were observed while 60 notices are in arbitration. The success rate under reconciliation structures is 68%.

The services and maintenance sector recorded the highest percentage in terms of notice (24%), followed by the metal trades (12%) and the textile, clothing and leather (10 %). In the same context, structures of the labor and reconciliation inspectorate recorded 14 sit-ins against 23 during the first half of last year, which corresponds to a decrease of 39%. These sit-ins have affected 14 private institutions with a participation rate of around 90% of the overall number of workers.

Evaluating these figures, Abderrahmen Fendri, accountant noted that despite this decrease, the phenomenon is still serious. “One hundred and ninety companies have experienced disruptions. This is too much for a fragile economy and at a time when we must redouble our efforts to improve the fundamentals of our economy,” he explained.

Faced with a glaring number of unemployed people, standing at around 800 thousand, the choices are very limited. We need to make growth. “The days of work lost mean less production. Indeed, one strike alone is too much; what about strikes involving 190 companies. In addition, these figures are not sufficiently relevant. What is the number of days of strikes recorded? What are the sectors affected by these movements. A strike at a key sector such as transport, for example, has adverse effects on the entire economy. ”

Is it possible to ensure social stability?

In response to this question, Abderrahmen Fendri said that the situation is certainly difficult. The purchasing power has deteriorated. Moreover, we went through a recession that is likely to continue.

In this regard, he stressed the importance of addressing the people in educational rather than demagogic terms. “We must explain to the Tunisians that we have to wait a few years and to accept sacrifices to restore the economic balance, otherwise we will continue forever to drag the effects of a sluggish economy,” adding: “We have to explain to Tunisians that to overcome the current economic situation, we must improve the competitiveness of our economy.”

We would still have to explain to Tunisians and show them through a clear policy, the will, strategy and resources of an intelligent transition from a sub-contracting industry to a production industry. To be convincing, the discourse must be also accompanied by visible and concrete action to bridge the gaps between social strata which have become very significant. Social programs need to be directed to workers.

“Today, a family that has no source of income is more likely to access home ownership through the program of 30,000 social housing units than a family whose head works but does not earn enough to afford a housing unit from FOPROLOS. Today, with the customs duty policy, a luxury product and a second necessity product pay almost the same rate of customs duty than a product consumed by all Tunisians,” said Abderrahmen Fendri.

Even more, should we not introduce a consumption tax on second necessity products, first to improve the revenues of the State and then to send a message to Tunisians that there is a policy that tends to bring social classes closer and reduce the gap between them.

According to him, public services need improvement, like public transport. “We cannot prevent the worker struggling to move from where they live to work from feeling frustrated over the privileged worker who travels via an air-conditioned car or citizen who has to wait several hours to be examined by a public health doctor from feeling aggrieved. Workers who see that there are early signs of radical solutions to their problems are more willing, in my opinion, to be more understanding than those found in a situation where we simply ask them to wait and postpone any claim pending better days. ”

Tunisia: Hexabyte improves its half-yearly revenues by 45% to 4.5 million...