Tunisia: The French never turn back to Tunisia! 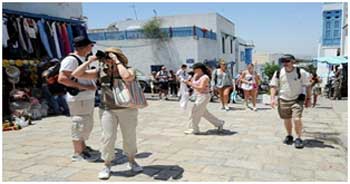 Despite the travel alerts issued by various Ministries of Foreign Affairs, recommending not to visit Tunisia after the terrorist operations that took place in some regions of Tunisia, the French always come and in large numbers to spend their holidays in Tunisia.

This trend was evidenced by the latest results of the barometer of tourism sales by travel agencies in France, recently published by the French National Association of Travel Agents (SNAV). The sales results announced that French tourists will be more numerous this summer in Tunisia. The 2014 summer season looks already very good!

The barometer shows a dramatic increase of 84 % for the month February 2014 compared to 2013, in both the number of customers and bookings to Tunisia via French travel agencies and 93% in terms of sales volume.

According to the same source, Tunisia ranks in 6th position behind Spain, Greece, Italy, Morocco and Turkey in terms of sales volume while the overall orders booked in travel agencies decreased by 7% in the number of passengers and by 5% in the number of business volume.

Attracting French tourists: Yes, but how?

The French want to come to Tunisia this summer. And indeed, the challenge is to develop a good strategy for tourists to come absolutely in mass during the summer season. It is in this context that tourism professionals have launched repeatedly campaigns that highlight a varied product with high added value such as cultural tourism, desert tourism and wellness tourism, while a particular emphasis will be placed on the promotion of alternative tourism.

The aggressive competition from competing countries, such as Turkey and Morocco which has greatly reduced the chances of Tunisia, should also be analyzed.

It should be recalled that Tunisia lost about 500,000 of its French customers in 2011 compared to 2010, a figure never recorded when comparing tourist flows from one year to another.

In 2014, Tunisia aims to recover these lost customers and especially European tourists who were the first to flee the Tunisia destination in the aftermath of the Revolution.

Tunisia second largest producer of olive oil in the world this...