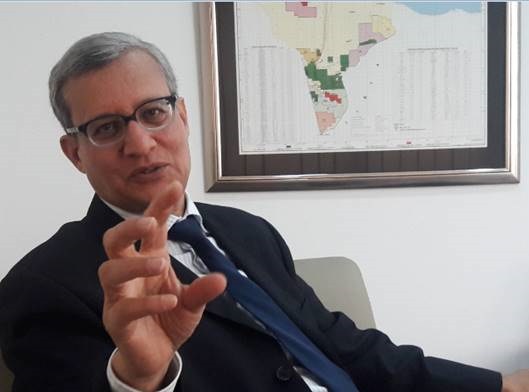 Trade unionist, from father to son, the Tunisian Minister of Energy, Mines and Renewable Energies, destroys the myth of oil abundance, addresses investors in this area and says everything on oil by figures. But there is even more!

Khaled Kaddour talks to AfricanManager about the next calls for tender and concessions in the solar and announces for this year the 1st power plant in Tozeur.

He also talks about the parallel energy market and gives details on energy for all and the 4,000 smart meters in Sfax.

Very few permits, too little production and therefore too little export too

Tunisia’s production is indeed very small. It is currently of the order of 40,000 barrels per day, compared to 10 thousand barrels / day in 2010.

The local consumption being the double of the production, Tunisia has an energy deficit of the order of 50%, with an increase of consumption between 5 and 6% per year, due in particular to the improvement of the quality of life of citizens.

That is why the main focus of our strategy in this area remains the security of supply and working, for that, with a time horizon, because energy investments are very heavy with an average of 5 years for the realization and even more when it comes to the entry into production of an oil discovery.

While you are talking about oil, how many concessions were there before the revolution and how many have they become and is there a demand on Tunisia?

The number of concessions has indeed decreased. On average, there were 20 wells per year.

In 2015 and 2016, we did not do any oil drilling. Drilling has timidly resumed in 2017, thanks in particular to the renewal of 2 oil licenses. It must be pointed out that the oil companies are not jostling for Tunisia.

We have several blocks free and even if we would do tendering, the demand almost does not exist, especially after the obligation for any request to pass by the Parliament, not to mention the social disruption of several concessions and recruitment imposed and untargeted, which have strongly impacted the demand for oil concessions and also exploded the costs of investment and decreased the attractiveness of the Tunisia site.

What is planned for 2018, in terms of concession and impact on production?

In 2018, it is planned to grant 8 new concessions, between extensions and new ones.

Here I need to focus on the visibility to be given to the investor over a minimum period of 10 years and the time required for the start of production.

Our goal now is to stabilize production at the current level of 40,000 barrels per day, taking into account work-over work on existing wells. Making new discoveries, like El Borma or Ashtart during the 1970s, is now almost impossible.

If, as you say, the investors are not jostling anymore, why ETAP would not be there and has so far merely taken up the role of partner of foreign concessions?

ETAP had already tried it in 2010, drilled a well and found nothing.

With Sonatrach the Algerian, it is a small discovery in Algeria and they are partners in a concession off the city of Mahdia.

The drilling resulted in marginal quantity indices that did not justify the start of production.

Other drilling is also planned on the same common concession to reduce the risk. The question is whether the state has the capacity to put 50 MD in a concession that may not be profitable?

There are some, like the Toumi group that starts with 3 wells where it has already made discoveries, but in small quantities.

Just for Laughs. Why are not you digging to excavate the oil lake on which Tunisia would swim according to some “experts”?

If that existed, it would be known and we would have seen the foreign oil companies run the exploration blocks and scramble to the gate to find this oil.

Let’s go back to serious things. Tunisia is importing an oil whose cost has increased and exceeded the forecasts of the 2018 budget law. Are we still able to ensure the country’s supply?

We have to do it. We import gas for electricity and will continue to import petroleum products…

Where do all these imports go, in addition to those of the parallel market, while industrial production does not increase?

The parallel market, in terms of gasoline, represents only 15 to 20% of consumption and the impact is visible only in the southern Tunisian cities where some petrol stations threaten to shut down. For electricity, we ensure the supply, domestic and professional, by importing 50% of our needs. So we manage to, because we have to, ensure the continuity of supply, despite the rise in prices.

In this regard, it should be noted that the compensation fund has been allocated 1,500 MD to cope and that each dollar of international price increase per barrel (159 liters) will cost 121 MD to the state budget. The problem is rather in the revenues of the state to cope with that and pay the bill in dollars. That’s why we strategically opted for renewable energy.

What about the solar plan and is there any progress in the tender for the realization of this famous plan?

The development of renewable energies is a strategic axis for the country. That choice, which is certainly proactive, is compelling, even if the technology does not yet allow storage.

For the acceleration of the renewable energy program, which was the subject of a seminar chaired by the Prime Minister, we have launched a first international call for tenders.

It is in the process of counting offers. The results of this call for tender will be known on March 15, 2018.

69 companies took part and it is about the installation of a capacity of 70 MGW in solar energy and 60 MGW in the wind.

Each concession project will involve a minimum of 100 MGW, for large solar power plants in the southern regions of Tunisia that will also create jobs in the interior regions of the country.

We also think of solar energy storage projects under the PPP (Public-Private Partnership).

The first projects should see the day in 2018, knowing that the Steg (Tunisian Electricity and Gas Company) has already started the construction of a power station of 10 MGW in Tozeur.

The Steg has already completed the construction of the infrastructure and the equipment has already been imported.

Have you received requests for large solar parks, as we have heard?

For proposals, it is not project ideas that we need, but concrete projects, including the business plan (BP) and financing, all in the context of calls for tenders.

Some have indeed shown up for over-the-counter projects. This is impossible. We actually had two proposals for the export of solar energy, without presenting either a BP or the financing of the cables for transporting this energy.

For the only small cable, which the Steg intends to build with European funding and in contractual cooperation with the Italian company “Terna” and the support of the two states and the EU, it will take an investment of 600 M €. This is not serious! Why would not they participate in our calls for tender and concessions? We do not find them there indeed.

Your department refers to energy strategies as notions of governance and equity. How is it going to translate in Tunisia?

That means, for energy equity, that we have to do it in such a way that electricity is always available, for everyone, everywhere, with the required quality and at acceptable costs for the working classes.

That’s why we are starting this year a photovoltaic installation financing program for low-income families.

The financing of the installation will be supported by the energy transition fund for low-income families whose consumption level is less than 100 MGW / month to help them better support their energy bill.

Since storage is still expensive, they will only pay for their consumption outside sunny days.

For governance, this will include the installation of new smart electricity meters. Called “Smart-Grid”, this program that the Steg is currently working on will start soon in the control region.

These new smart meters should allow every citizen to know his consumption instantly and the Steg to take the meter reading remotely. The project will include the installation of 4,000 meters and the choice is set in the region of Sfax, before generalization throughout the territory. Bill transparency is an important element of governance. Transparency will also be upheld through the next revision of the hydrocarbons code.