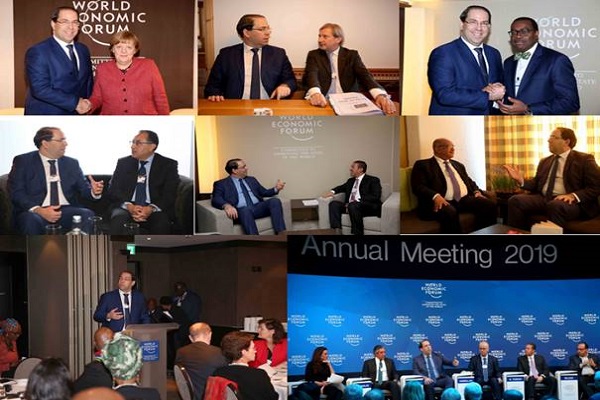 The Davos Forum in January each year is “the place where to be” for some 3,000 prominent figures in the economic, financial and political fields from 90 countries.

Tunisian Prime Minister Youssef Chahed was invited by the president of the Davos Forum and it is for the second time that he finds himself in the big leagues, approached by major media such as CNN.

He was engaged in the favorite sport of almost all the great personalities present, the “speed dating”, between two assignments or two panels of the Forum in order to optimize this presence in the higher global political and economic spheres.

The opportunity is thus provided for the Tunisian Prime Minister to lobby for his country, dispel doubts about the prospects of ending the crisis, plead the Tunisian cause, explain the importance of 2019 as a pivotal year in the process of political and economic transition and especially to sensitize the partners of Tunisia to redouble efforts to support it on the path of the success of its dual political and economic process.

It is true, however, that Tunisia’s partners are already starting to get impatient and are telling it to the Prime Minister.

In fact, speaking on Tuesday during one of the multiple panels, Youssef Chahed announced the reforms undertaken by his government to improve the investment climate.

He ended by saying, while mentioning the socio-political situation: “we are living a period of transition, since 2011, and the political transition has a cost, because the economy has been suffering for 5 years, and we must not forget that we have suffered terrorist attacks.

It must be considered that it remains possible to manage this cost.

And the moderator of the panel to challenge him: “this story is repeated at each session in Davos.” This is to say that Tunisia will have more and more trouble attracting the sympathy of Western democracies.

The mere fact of having become the only democracy in the Arab world or of being behind the so-called “Arab Spring” will no longer suffice to claim help in getting out of the political and economic slumps, where year by year, refusing to give top priority to the economy to stay on international radar, cooperation and investment.

It also means the reframing that Tunisia will have to make of its image, damaged by the political disputes for plums and by the devastating strikes and without any consideration on the cost of these movements, made in the name of the democracy for which the West congratulated it for a while, and on its chances of getting out of the economic and financial crisis.

Substance, thanks to meetings difficult to cumulate in such a short time

However, the Prime Minister does not give up and always embark his staff to preach the good word for his country, hence this brief presence at the Davos Forum.

He met briefly with the Algerian Foreign Minister, the Egyptian Prime Minister, two rather formal meetings, for example with his Egyptian counterpart, with whom there was a brief friendly discussion on football, before returning to serious matters.

Serious things, such as with German Chancellor Angela Merkel who confirmed the support of Germany, a country with which cooperation is most supported and the help is more concrete for the Tunisian economic transition.

This is the same with the president of AfDB to raise his awareness of the importance of support by the African Development Bank for foreign investment in Tunisia.

Akinwumi Adesina said the AfDB is preparing a major program to help create 25 million jobs in African countries and that Tunisia will have a lion’s share.

Or also the European Commissioner for Neighborhood Policies, Johannes Hahn. On the same day, the same Commissioner announced a budget of € 305 M for the economic, political and social inclusion of young Tunisians.

On the last day of his participation in the Davos Forum, Chahed confirmed to an African panel on the “African agenda” Tunisia’s interest in Africa and its willingness to be a commercial platform to develop its exchanges with Europe. He took the opportunity to launch an investment call for those targeting Africa or vice versa.

This means that the actual 24 hours of the Tunisian PM’s visit to Davos Forum have been well used and the seven high-level meetings that have been held have been optimized to reframe the image of Tunisia, a country that is doing what it can to get out of the crisis and that need to be continuously supported, through bilateral cooperation and investment, both economic and human.

An opportunity for the youth of the African Union to enhance...