HomeInterviewMohamed Iqbal Ben Rejeb: MFA does not cooperate with associations involved in...
Interview

Mohamed Iqbal Ben Rejeb: MFA does not cooperate with associations involved in disappearance of Tunisians in countries in conflict 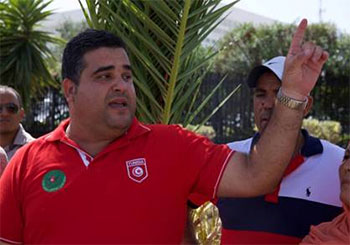 For years, many Tunisian families have been desperately seeking detailed information on the circumstances of the disappearance and the fate of their relatives in Iraq and Syria. It is in this context that the Tunisian association for the rescue of Tunisians stranded abroad recently organized a protest outside the Ministry of Foreign Affairs in Tunis.

Mohamed Iqbal Ben Rejeb, President of the Association said in an interview with African Manager that this initiative aims to support a series of demands including that of knowing the fate of Tunisians detained in Syrian and Iraqi prisons.

What are the goals sought through the organization of the protest?

We organized the protest to demand a set of demands, including essentially the return of Tunisians jailed for cases related to terrorism and the implementation of stronger measures to fight against the networks recruiting Tunisian youth for jihad in Syria and Iraq.

Likewise, we call on the Syrian and Iraqi authorities to reveal the identities of detainees, and the establishment of a comprehensive strategy to supervise Tunisians returning from countries in conflict. We also demand a meeting with the foreign minister.

Do you have data on the number of Tunisians detained in Iraqi and Syrian prisons?

No, we do not have the list of Tunisians detained in prisons in Syria and Iraq. We contacted the Iraqi authorities who claimed that all data relating to persons detained are available at the Ministry of Foreign Affairs.

Did you receive complaints about recent disappearance of Tunisians?

Yes, we have received, since the beginning of 2015, complaints from families who said their children are reported missing after leaving Tunisia to conflict countries (Iraq and Syria).

Do you have statistics on the number of Tunisian fighters in Syria and Iraq?

No, we do not have exact figures on the Tunisians who have joined jihadists in Syria and Iraq.

However, according to our own sources, nearly 200 Tunisians were killed in the two countries.

You have requested a meeting with the Minister of Foreign Affairs why?

As an association that deals with Tunisians stranded abroad, we have repeatedly called for meetings with Minister Taieb Baccouche to get concrete information on the fate of Tunisians detained in prisons for common law cases. However, no reply has reached us from the foreign minister. That department is not cooperating with civil society.

Tunisia’s total adherence to the ”Desertec”