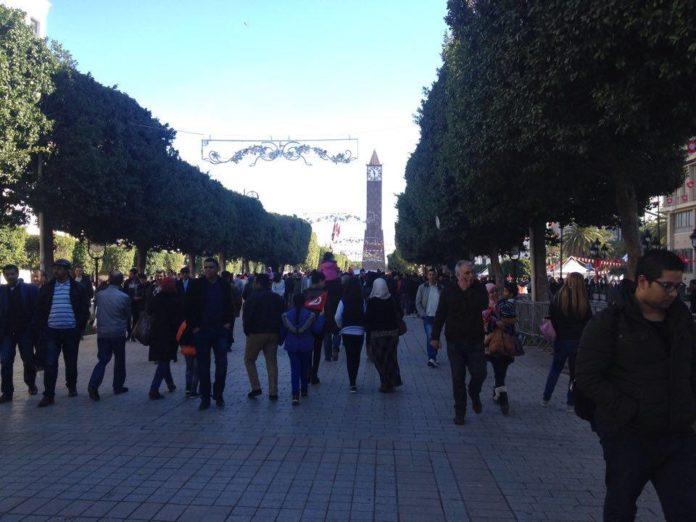 Disappointment is the feeling that prevails today in Tunisia as the country marks the fifth anniversary of the revolution that led to the fall of former President Zine el Abidine Ben Ali on Friday, January 14, 2011 and his exile to Saudi Arabia.

African Manager, through a report in Habib Bourguiba Avenue, collected the comments and reactions of the Tunisian recently rewarded by the international community with a Nobel Peace Prize, on these five years of the Revolution.

The Revolution Avenue was littered with barriers and baffles of barbed wire installed the day before and placed under the supervision of law enforcement personnel. Yet the crowd was not as important as in previous years, despite the programme of events scheduled for that day.

“Today, we have nothing”

The fifth anniversary of the January 14 Revolution, there were an air of pessimism almost everywhere despite the progress made in the democratic transition process.

“Five years have passed and achievements are still below our expectations,” laments Lassaad (52 years) whom we met during the festivities organized on the main streets of the capital.

“Initially, the Tunisians were optimistic about the future of their country, but unfortunately a big gap separates dream from reality,” says Lassad who was accompanied by his grand-son.

The opinion of Lassaad is far from unique. Many Tunisians share the same view, like Sami (civil servant). “The deterioration in purchasing power down 40% since 2011, employment for the jobless, who are still struggling to find work remain a wound in Tunisia after the January 14,” he claimed.

“It was a real and beautiful Tunisian revolution, but the record is deplorable and even below the aspirations, especially since the promises of the entire political class were not held,” says Sami. He added: “everything has changed but nothing was done. Worse, all indicators are flashing red starting with zero growth, a deteriorating productivity and a rise in extremism.”

In view of the gloomy assessment, he wondered about the future of Tunisia “which he sees uncertain and even difficult.”

A sense of betrayal…

At the political level, Tunisians also feel betrayed and many are disgusted by the political class, Hassen travels, former political prisoner and father of a martyr is the most striking example.

“It was believed that the revolution would change our lives, but we ended up grappling with the counter-revolution initiated by President Beji Caid Essebssi in coordination with the Islamist party,” insists this old man, not excluding the return of dictatorship.

Waving the national flag, he admits to not being satisfied especially that “families of martyrs and wounded of the revolution have been marginalized and this issue has languished in oblivion.”

Is the revolution respected?

“We celebrate this anniversary as the government is not respecting the fundamentals of the Revolution,” says sarcastically, Jamila Laabidi (teacher) before adding: “we would have liked to see progress but we are still in the same starting point.”

On the social level, the situation is grim. Jamila cites the resurgence of protests affecting all sectors without forgetting some incidents that marred rights and freedom in Tunisia namely the introduction of the death penalty in the law against terrorism and the rise of torture in prisons which continues with increasing pace.

For this teacher, much remains to be done and another process is still needed to ensure the democratic transition, expecting a new revolution in such a situation.

It is time to change the mentality…

Despite this fit of despair, Tunisians have chosen to go and celebrate January 14 at Habib Bourguiba Avenue.

Lilia Rebai, Director of the Tunis office of the Euro-Mediterranean Network of Human Rights (EMHRN) expressed pride in the gains made during the 5 years of the revolution.

“The new Constitution, which guarantees the fundamental rights of Tunisians, is really a pride and the series of elections have signed our transition to a democracy especially that there has been a peaceful transfer of power,” she said.

But …., she noted, there is need to change the mentality of Tunisians. “Institutions exist and we really need a revolution in mentalities,” said Lilia Rebai before adding: “we must really learn to love each other, to respect our differences and respect above all freedom of conscience because abuses were recently recorded on the pretext of the fight against terrorism.”

On behalf of civil society, she called to remain more vigilant especially that “once we arrive at these results, the objectives of the revolution remains possible,” she concluded.

Tunisia: Tourism receipts not calculated in foreign currency amount to 3.1...