Tunisia: Requiem for a revolution! 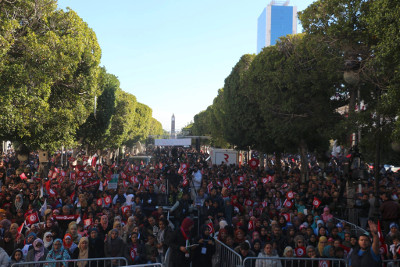 The revolution! What revolution? Five years after its outbreak in January 14, 2011, the one that lit the hope of Tunisians is now only a fade memory which commemoration has even stopped attracted people. The event is not in the street, let alone in minds as disenchantment is high and hope that inspired an entire nation emerging from 23 years of embers faded.

The report is disastrous but real; it is sobering when many hopes, and for many, all hopes, have been, over days, pulverized by the use that was made of the Revolution and the despair it has caused in a Nation which has yet stood up as one to mourn a regime of which it had felt in its flesh all the malfeasance, vileness and depravity.

As a corollary, it began to hope, but in fact it has only fed on wild hopes, to, ultimately, find itself high and dry. This is not because the Revolution was badly done, but because it was quickly confiscated by others, and those others are still there, under different names, pulling in different directions, not knowing where to go nor being able to act, except making promises, ignoring them, making others, and betraying them again. The decoy, in fact!

Birthplace of the Arab Spring! Illusion and nonsense! Tunisians have not seen anything except the palaver of politicians, strikes, sit-ins, unemployment, youth adrift, schools trampled, insecurity, multiplied poverty, abandoned areas, inflation , terrorism with its procession of dead and wounded, despair … But we must say that Tunisians are free, immoderately free, to the point of getting in a complete muddle, do what they like and ask everything and immediately in the face of a helpless and in times inoperative state that saw its authority slip through its fingers, trying to recover, but usually in vain.

An emptiness that associations, professional organizations and others are quick to fill by imposing their own rules and fixing the direction to negotiate with the stroke of edicts and pressures. Is it the fault of the Revolution? No doubt did not Mirabeau say that “the best way to derail the revolution, is asking too much.”

Politicians boast about providing the Tunisians with a constitution, paving the way for both parliamentary and presidential elections, and therefore the formation of a sustainable government.

This is indisputable and even truer as the Basic Law was published in the Official Journal of the Tunisian Republic and celebrated in the cottages. But those whom it is intended for have not seen anything except maybe a differently constituted Chamber, but this time under the leadership of two “alpha males” who undo everything under the seal of a consensus that arranges their interests more than anything else pending, for one of them at least, the auspicious occasion of concluding…

Lawyers say that a constitution depends totally on its use. However, in practice, we noted that it was kept in the state of an empty shell whose agreed content is stored immediately in the store of old moons, with MPs more prone to squabbling than to legislating.

At the same time, the government, certainly, governs but with the means at hand that are derisory or even skeletal, especially under as strong and multifaceted pressures as its composition fluctuates with winds of politicking, disproportionate to the challenges of a nation claiming in chorus a change that is still pending.

From all that has preceded, there appears no trace of revolution which has become more a view of the mind than a daily experience. And this has everything to be depressing for people who founded great hopes on January 14 which they regarded as a landmark date to free them forever from the horrors of the near and far past and embark them on the way of another Tunisia as Tunisians wish and dream of.

“Vote for the man who promises least, there will be fewer disappointments.” Bernard M. Baruch, advisor to US Presidents Wilson and Roosevelt had said.

Tunisia would lose $49 million, in case of no-deal Brexit