HomeFeatured NewsTunis: new list of terror targets throughout this summer revealed by The...
Featured News

Tunis: new list of terror targets throughout this summer revealed by The Independent 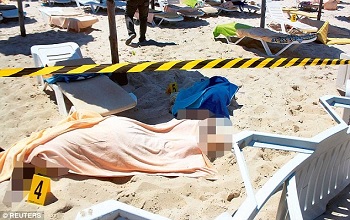 Tunisians, who have been trained with killers in the terrorist training camp of the Islamic State (IS) in the south of Libya, are planning more attacks, says the British newspaper Daily Mail on its Thursday July 2 issue.

Tunisian accomplices of the terrorist group IS compiled a list of new terrorist targets after the success of this year’s two bloody attacks, it also revealed and it appears from an investigation of Jihadi internet forums and social networks that plans were drawn up for attacks against shops selling alcohol, the country’s main airport and the island of Djerba, reports, for its part, The Independent.

Places frequented by Western tourists are supposed to be the main target of terrorists who seek to paralyze the tourism industry in Tunisia, which represents 15 percent of the country’s total revenue.

Thousands of tourists have fled Tunisia after the Sousse attack and the number of tourists should be significantly lower than normal for at least the rest of the year. So far, the financial loss to Tunisia following the attacks was estimated at $ 450 million.

Seventy people were killed in two terrorist attacks linked to IS in Tunisia to date this year.

The first attack on the Bardo Museum in Tunis, on March 18, had killed 22, mostly Western tourists. The second on June 26, against a seaside resort of Sousse, has killed 38 people, including 30 Britons.

The problem is that other attacks might be synonyms of total disaster for the country’s tourism industry, sticking to it the reputation of an epicenter of terror it would struggle to get rid of for the rest of the decade.

According to the Independent, conversations with senior officials of the Tunisian security have revealed fears that those who have been trained with the attackers of the Museum of Bardo and Sousse are the very people who are preparing to commit other atrocities.

Earlier this week, it appeared that the perpetrators of two attacks had all received military training at the end of last year in the distant camp of terror in southern Libya.

The Tunisian authorities have announced the arrest of 12 people they suspect to be linked with the attack on Imperial Marhaba in Sousse, adding that they continue to search for two others they suspect of have been trained in the terror camp in Libya.

“This is a group whose members were trained in Libya and who had the same goal. Two attacked the Bardo and one Sousse,” revealed Lazhar Akremi, Minister for Relations with Parliament, confirming that a total of 12 suspects have been arrested since Friday following the worst ever perpetrated massacres in Tunisia’s modern history.

IS jihadists, who control vast territories in Iraq and Syria, claimed responsibility for the bombing of Sousse, but the Tunisian authorities say the shooter was not on the list of jihadists registered by the police.

More than 3,000 Tunisians have joined the ranks of the IU in Iraq and Syria, constituting by far the largest contingent of foreign extremists who fight for the terrorist group in the Middle East.

Others have gone to neighboring Libya, where a conflict between two rival governments has allowed Islamist fighters to seek refuge and to gain ground.

Tunisian passport among 10 most powerful passports in Arab world

Govt expects BP’s exit from Zambia to be seamless