Tunisia: “green paradise” in the heart of Tunisia’s desert 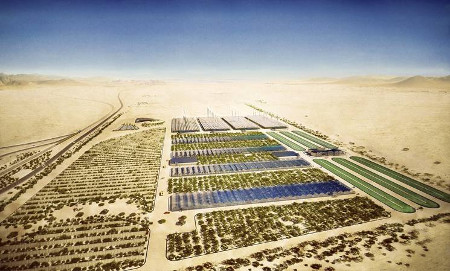 The Sahara Desert is probably the last place where we seek to grow plants and vegetables.

But this is the dream attached to an ambitious project to make the largest sand desert in the world bloom again.

In its latest move, the Sahara Forest Project (SFP) will build a “farm” of $ 30 million dollars over 10 hectares in Tunisia in order to diversify the environment and create jobs, food and drinking water in the region.

Today, over 800 million worldwide live in “food insecurity.” This means they do not know from where their next meal will come, and this number is expected to increase as the world population grows and our planet is warming.

Water scarcity already affects a large proportion of the world population, which is another challenge that SFP hopes to meet.

We try to achieve a triple bottom line,” Joakim Hauge CEO of the Norwegian company told CNN. “Something that makes financial sense, but also delivers social and environmental benefits.”

The desert sun will be harnessed for solar power to heat and electrify the site. Seawater will be piped in to cool greenhouses and allow year-round cultivation of crops.

Seawater will also be desalinated to extract both salt and fresh water, and the humidity of the greenhouses will be used to spur the growth of new plant life outside the facility, in the hope of regenerating a wider ecosystem.

The methods may seem far-fetched, but a successful pilot of the model in Qatar produced vegetables at a comparable rate to European farms over three crops a year, while plants multiplied rapidly around it. A scaled up facility is under construction in Jordan.

In Tunisia, it is hoped that local people will be employed as farmers and technicians. The project has the support of the Tunisian government, which seeks to mitigate the effects of global warming, including drought.

While the SFP is expanding, Prof. Heribert Hirt, head of the Center for Desert Agriculture at the King Abdullah University of Science and Technology in Saudi Arabia said the problems are not dissimilar to doing agriculture on Mars.”

“(Among) the biggest problems in the entire region of Northern Africa and the Arab countries are the dust and sand storms that constantly cover up solar panels and get into all machinery that is exposed,” he said.

However, he believes that the SFP is “worth the effort and will teach experts how to transform these vast regions of unused land back into agriculture.”

The SFP intend to scale up their model to have a greater impact. Looking beyond its work in Tunisia and Jordan, the group has embryonic plans for a 4000-hectare mega-facility that would employ 6,000 people and deliver 170,000 tons of produce each year.

“The project of the Sahara Forest allows the cultivation of plants, but also to give hope and opportunity to people,” says its website.

“[It] can be implemented successfully in some parts of hottest deserts of the planet.”

Tunisia : 4000 industrial enterprises at the PMN.

Tunisia: Inflation stable at 3.4% in March