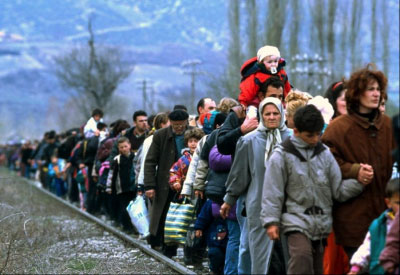 Europe is now years into a refugee crisis of historic proportions, and, frankly, there’s no end in sight. Even well-intentioned efforts to stem the crisis have struggled.

The sheer intractability of the problem has spawned a number of wild suggestions for imaginative — though not necessarily practical — solutions. The latest may be one of the most audacious: a proposal to build a man-made island off the coast of Tunisia that would serve as a haven for refugees hoping to make it to Europe.

This idea comes from Theo Deutinger, who runs the design and architecture firm TD, which is based in the Netherlands, a country with some experience in creating artificial landmasses. The firm is known for its experimental and theoretical work, which often focuses on issues of globalization.

Deutinger dubs the project Europe in Africa (EIA), and it already has a flashy website that prominently features the enticing tagline, “The first truly European city.”

According to the plan, EIA would be a city-state established in the Tunisian Plateau — a thin strip of seabed that sits between the exclusive economic zones of Tunisia and Italy within the Mediterranean.

The European Union would rent this land from those two countries on a 99-year contract, Deutinger reasons, and then create a landmass that would serve as a new country “with its own constitution, economy and social system” under the protection of the European Union.

The plan suggests that the city might be like Carthage, the ancient city that was the center of Carthaginian civilization and was located in what is now Tunisia.

Reached via email by the Washington Post, Deutinger explains that tagline: The EIA would be the first city that is a part of Europe but not a part of any European nation state.

Additionally, it would be bound by the European constitution — a planned continent-wide constitution that was never ratified after French and Dutch citizens voted against it. “So, Europe in Africa would also be a testing ground for the lately troubled European Union,” Deutinger writes.

Deutinger hopes the setting of the country could combine the best aspects of Europe and Africa. He says refugees he has been helping with language classes have embraced the idea. “It was received very positively since it is located in a familiar climate zone most of the people are from,” he explains.

EIA would be designed to accept everyone who wants to join it. Refugees like those dying in shipwrecks across the Mediterranean would be welcomed, as would economic migrants.

There would be regular boats from North Africa to allow refugees and migrants. While on the island, new arrivals would be given a chance to work. “One has to imagine the beginning of this city as the beginning of an American pioneer town,” Deutinger says, with larger European companies coming in only later so as to not disrupt the economy as it grows.

Those who live on the island wouldn’t be granted automatic E.U. citizenship, but they could gain it after five years of living in EIA. (Presumably, this delay would allow time for the appropriate security vetting and other arrangements).

Does it sound realistic?

It certainly sounds nice. A more difficult question is whether it sounds realistic. We’ve seen a number of similar proposals. Last year, Bay Area real estate tycoon Jason Buzi contacted WorldViews to discuss his idea for a “Refugee Nation” that was far less specific though broadly similar to Deutinger’s EIA idea. Egyptian telecom billionaire Naguib Sawiris subsequently announced his plan to buy a number of islands that could be established as some kind of haven for refugees.

Neither Refugee Nation nor Sawiris’s plans have come to fruition yet, and it is hard to see much progress has been made. The potential hurdles are easy to spot. Most obviously, the logistical process of buying the land for a new country isn’t simple, especially if it involves the cooperation of other countries or organizations such as the United Nations.

Deutinger hopes that by creating a new landmass in the Mediterranean he might at least be able to sidestep that problem a little.

“EIA will not become a Ceuta or Melilla since it does not belong to any nation,” he writes, referring to the Spanish cities that reside within the landmass of Morocco. “EIA will not be colonial since it belongs to its inhabitants and not to any European nation. EIA will not be a ghetto since it will not be fenced.” Deutinger says he is working with a team on filling out the concept and making it a real plan rather than a loosely mooted idea.

“It would have to be a utopia or it would become a dystopia,” Bill Frelick, director of refugee rights at Human Rights Watch, said about Buzi’s Refugee Nation idea last year. Other experts agreed, with some pointing out that the creation of a new country for refugees was an attempt at solving Europe’s refugee problem, rather than solving the problems that cause people to become refugees.