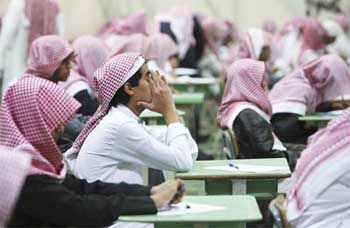 Saudi Arabia has been ranked seventh globally for its high public spending on education in the latest ‘Learning Curve Index’ published by Pearson, a leading learning company, which rates the educational performance of 39 countries.

Saudi Arabia also performed highly in the category of pupil-teacher ratios at primary level, recording a ratio of 11.01 in 2011, the most recent year in which data is available.

The Kingdom’s ratio is similar to that of Qatar, which recorded an 11.28 ratio and not far behind the highest ranking country, Sweden, which has a 9.27 ratio. India recorded the highest ratio on the table at 35.15, said the report.

South Korea, Japan, Singapore and Hong Kong claim top spots in overall education ranking due to a ‘culture of accountability’ in which teachers, students and parents all take responsibility for education; and society values teachers and schools far more highly than in many other parts of the world.

At 19.26 per cent, this figure is significantly higher than that recorded for other countries in the same year such as the the US and UK, at 13.81 per cent and 11.26 per cent, respectively.

Qatar and Saudi Arabia were two of the 50 countries featured in the Learning Curve’s Data Bank and are both profiled in the new report.

Karim Daoud, the managing director of Pearson in the Middle East, said the extensive collection of data will prove particularly useful for governments in the Arab region who continue to provide vast funding towards improving national education systems.

Qatar and Saudi Arabia were two of the fifty countries featured in the Learning Curve’s Data Bank and are both profiled in the new report.

“The UAE, Qatar and Saudi Arabia have all committed to comprehensive education reform as a way of ensuring the future economic and social well-being of citizens after oil revenues can no longer guarantee national wealth,” stated Daoud.